Where history, tradition and modernism meet.

What is a wedding if not a very special, intimate, once-in-a-lifetime experience shared with only the closest and most significant people in our life? Imagine the following scenario – you are surrounded by family and friends, feeling cosy in the warmth of your significant other’s embrace and find yourself amidst a historical setting as if taken out of a 19th century novel. You are ready to take the final steps down the aisle towards the modern linkage called wedlock, but as you look around you can feel history’s breath. It all sounds unreal, does it not? But you can stop the flow of your imagination right there, as the above description is not part of a fiction, but an example of actual wonderful experience.

Surely, the people you surround yourself with on this special day are the most important part of planning a wedding. However, an essential role in creating the proper atmosphere and in adding to the magic of the wedding is the choice of the perfect spot for the ceremony, alongside with hiring a professional wedding videographer to capture the fairytale and vitalize it in just a few minutes. We all know how hard it is to make such a choice – there are so many opportunities and tempting places where one would want to say the sacred vows. But the enormous variety of options makes this decision even harder. That is why we would like to share with you a short wedding videography created in a wonderful place.

In the following lines you will read about a Jewish wedding which took place at a very special spot, namely the Chiddingstone Castle in Kent. We will devote a paragraph to the setting of the special day, but won’t get into too much detail about it, instead, we will rather focus on the atmosphere which such a historical place creates. And at the end, we will go through only a few of the advantages that the choice of such a setting has. If you are impatient to read, don’t hesitate to proceed, click on the play button and dive into the magical cinematography of this beautiful Jewish wedding. However, if you’d like to first give freedom to your imagination and let it soar to unimaginable places, continue reading.

First things first, let’s talk a little about the setting. The Chiddingstone Castle has been the home of many people from all walks of life – from aristocratic families such as the Streatfeild, through lords and military forces during World War II. The building certainly has seen and endured a lot and is a place of many memories. You will probably find it interesting that the castle itself is of Tudor origins. It is filled with rooms decorated stylishly according to the Victorian Age. Nevertheless, during the 19th century, the castle was remodelled in order to appear more like a medieval one. In 1955 Denis Bower, a passionate collector of antiques, bought Chiddingstone Castle with the intention to turn it into a museum where he would have enough place to displace his enormous collection of objects. He was taken by the Japanese, Egyptian and Buddhist culture and some of the items that, even to this day, can be seen in his collection are armour, portraits, swords, artefacts and what not. But enough with the history.  Currently, the castle is open for visitors who would like to get a glimpse of Denis’ collection or simply want to enjoy a hot cup of tea amidst the serenity of the surrounding countryside. What fascinates us the most is that the castle is also open for different events such as weddings. And here comes our specialty.

Imagine that you and your significant other are looking for a calm spot but you want it to be only yours on your wedding day. Certainly, you wouldn’t opt for the conventional church venues in the busy big cities with all the hassle and bassle. Or maybe you are looking for a place that has the historical air around it. In that case, places such as Chiddingstone Castle in Kent would be the perfect option for you. One of the many advantages such places have to offer is the feeling of history being alive and not forgotten. You might still choose a modernistic way to organize and present your wedding and ceremony, but you might also accomplish this by eclectic combination of present and past. Because, after all, if it wasn’t for yesterday, we wouldn’t be here today.  Another positive aspect of the setting in question is the brilliant spots it has to offer for the creation of awesome wedding cinematography. Any professional videographer will be nothing but amazed by the surrounding areas and nature around it. It seems as if civilization has taken a step back and hasn’t dared to touch and torn the place apart. The preserved nature offers wonderful colours and lighting which are a compulsory part to any wedding video. The architecture itself adds an aristocratic sense to the event and takes the audience back to the beautiful old times.

In conclusion, places such as Chiddingstone Castle along with many others are a great option for a wedding day – a place where tradition and history are not dull and forgotten and can be enliven and combined with a modern wedding ceremony. What’s more if you want natural beauty in your wedding video, you would definitely consider such places as a setting for your very special day. But enough words, you have waited long enough – hop on, watch the wedding video and see for yourself what the wedding videographer in Kent could capture from the beautiful story of the two Jewish lovebirds.

Hi everyone, my name is Emmanuel and I am a full-time professional videographer who produce affordable wedding films. I am focused to capture and edit the videos in very unobtrusive, natural and cinematic style. My coverage is national with no extra cost for some of the packages I offer. 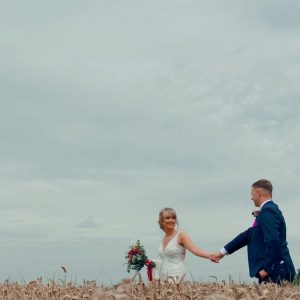 A wedding is one of the most special days in a person’s life. The bride and the groom are together entangled in vows that will define the rest of their...

Your wedding should be one of the most memorable moments of your life. To capture the essence of the event as well as every little detail, you will need the...

Believe it or not, but there’s more that one type of wedding ceremony. If you look around the world, you’ll see happy couples tying the not in a variety of...